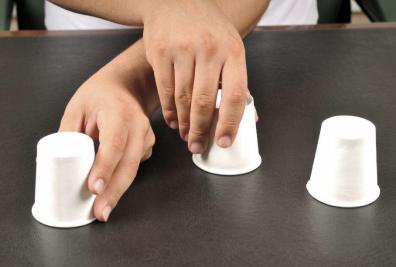 The nurse called my name and led us to a small corner room. This room was really in need of some colour and joy as it was devoid of everything except a table and three chairs. Functional with no feeling. If they wanted something sterile and depressing, then they more than achieved it.

The nurse introduced herself and we all sat down at the table. She asked me if I needed a minute and I shook my head and whispered no. She had a brown envelope in her hand which she put on the table, opened it up and slid the papers into the middle of the table in two piles side by side.

I just shook my head no again.

“Please take the papers home and have a read of them. I have made another appointment for you in two weeks time. Here is my card, any questions just give me a call”. With that she left the room.

Not that I expected her to rub my shoulder or hold my hand but it was pretty clinical. At the time I needed something else – what I don’t really know. It would not be until much later that I realised and understood that she could say or do no more.

We left soon afterwards and read the sheets on the train home in silence, swopping them around and back again. It wasn’t until later that evening that we spoke about what we had read. I was surprisingly quite calm and civilised about the contents of the documents and making the final choice. There are, in reality three choices. They are the radical prostatectomy, radiotherapy and hormone treatment which have to be taken together and doing nothing. We could have been selecting furniture from an Ikea catalogue, going through the pros and cons of décor and furniture placement as myself and Annette discussed the pros and cons.

The radical prostatectomy is where the whole of the prostate is removed by keyhole surgery, using the robotic DaVinci machine. This machine assists the surgeon in making the precise and minute actions required during the operation. The effects of the surgery are greatly reduced as only five small incisions (for the drip and instruments) and one slightly larger incision (for the monitor and final removal of the prostate) are made. Apart from the normal hazards associated with any type of major surgery e.g. infection, doctor leaving a tuna sandwich inside you, waking up next to a flesh eating zombie, the wrong organ being removed or some exotic bacterium decides you are a delicious meal you should only require a night in hospital. The side effects include temporary incontinence and impotence which almost all patients will experience directly after surgery but with special exercises, persistence and a lot of patience you should regain full control of both. Approximately eight weeks after surgery another blood test should show the PSA level is virtually undetectable and thus you are free of cancer. If you are really unfortunate the temporary side effects could become permanent.

The radiation therapy is where external x-ray beams are directed at the prostate which kills cancerous cells while trying to spare the surrounding healthy cells. This is carried out in twenty minute sessions, five times weekly over a six to eight week period. While the procedure itself is painless over time the treatment may cause urinary, bowel and hydraulic problems. The key disadvantage is that if the cancer returns or spreads after this treatment surgery may not be an option afterwards. The radiation therapy has to be taken in conjunction with hormone therapy which stops the production of testosterone, which is required by the prostate cancer cells to grow. If the prostate cancer has spread, when the testosterone is removed it will usually shrink. Hormone therapy, in the form of tablets, implants or injections, may only last as long as you are undergoing radiation therapy but it could also continue afterwards.

However testosterone, as many of us know already, just happens to be that little, teeny, tiny, thing that makes men, well men. So without it you kind of turn into a big hairy chick you would not want to meet on the dance floor or on a blind date.

Oh and while the list of side effects is long and harsh they may remain for some time after the hormone treatment actually stops.

You may experience hot flushes – I had to look this one up as I had no idea what a hot flush was.

Nice. Will be looking out for that one at the office.

There could be problems with the kings hydraulics, getting the king in the mood or the king may become shorter.

You may experience extreme tiredness. You may lose body definition and gain weight. You may become weaker. You may lose some body hair. Your bones could get thinner. You may increase your risk of heart disease.

You may experience an increase in breast tissue. Now we are not talking about getting a nice pert b cup that for a micro second might make a guy think twice or will make you very popular in prison. Nope we are talking about the dreaded flabby fat boy moob jobs.

You may experience changes to your mood.

You may become irrational.

You may cry more.

You may become anxious.

You will develop a super human memory and be able to recall every single conversation, every forgotten anniversary, every single comment ever made about your weight or the clothes you are wearing, every household DIY promise that is outstanding, every ‘unauthorised’ purchase, that date you looked too hard at that scantly clad woman and the smallest slight from the opposite sex dating back at least a decade.

OK I made the last one up, I couldn’t resist 😊

Quite a list. What a selection, it raised my eyebrows too.

Off to surgery we go then.